One of the true gems of the Long Island Rail Road, Port Jefferson Station, located on the Port Jefferson Branch, serves approximately 1,375 riders each weekday. The current station building, opened on July 25, 1903, was designed by famed architect Stanford White, most known for designing the triumphal arch at Washington Square Park and the second Madison Square Garden.

Over the past year, we made several enhancements at Port Jefferson Station, including a rehabilitated station house waiting area, which opened in July 2018, as well as renovated restrooms. The waiting area has been outfitted with free public Wi-Fi, charging stations and updated information displays, bringing more customer-focused amenities to those awaiting their trains. We refreshed the station building’s exterior, and enhanced the general station environment by reconfiguring the plaza area, improving customer flow, and parking improvements. New platform railings and a shelter shed were also installed, along with new signage, and an outdoor sculpture, have also been completed. 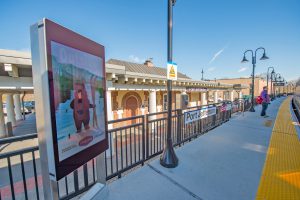 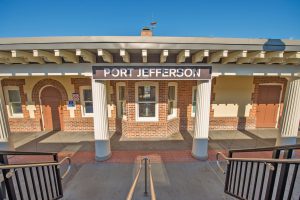 Through the Years: A History of Port Jefferson Station

The Port Jefferson Station stop was first established in 1873. The station building was remodeled 95 years later in 1968, and later restored to Stanford White’s original design in 2001. The high-level platform at the station was installed in 1988, followed by new railings and platform shelters in 2000. The recent enhancement of the station completely restored and enhanced the original aesthetic of the building’s exterior.

Enhancements to the Port Jefferson Station are part of an expansive LIRR undertaking to improve customer experiences and infrastructure throughout Long Island and to support greater economic growth in the region.