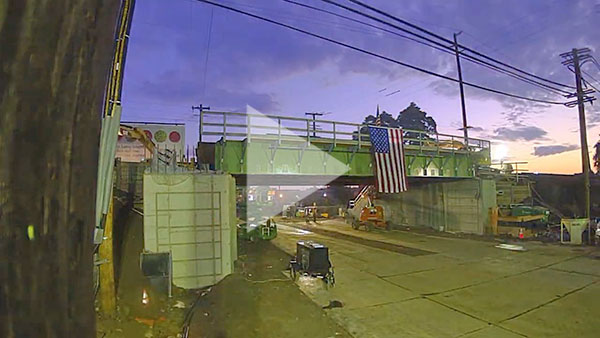 This morning marked yet another successful milestone day for the LIRR Expansion Project: the first LIRR train rode over the new Glen Cove Road Bridge, officially bringing our total new bridge count along this corridor to *SIX* since we began work on this project last year.

Believe it or not, we replaced this entire bridge just this past weekend. This all started in the early morning hours on Saturday, when teams from MTA Construction & Development, LIRR, and 3rd Track Constructors removed the old Glen Cove Road bridge and replaced it with a new 285-ton, 60-foot long span using specialized equipment. Utilizing methods never before used on MTA projects before LIRR Expansion, we accomplished this in less than 72 hours, allowing LIRR train service to begin running again for Monday morning’s rush hour.

After crews set the bridge firmly set in place, LIRR crews rebuilt the track atop the bridge and replaced power, signals and other systems. The bridge contains a bay for a third track that will allow the LIRR to expand capacity, allow true reverse commuting for the first time in the railroad’s 186-year history, and increase flexibility that will allow faster recovery in the event of service disruptions.

When we plan big weekend projects like this one, understanding we’re asking our weekend customers who use stations along this corridor to alter their travel plans, we make sure we do everything we can to maximize the amount of work we can get done. As monumental a job as the bridge replacement was, another set of crews were not too far away at Carle Place Station, where they hoisted into place a new pedestrian bridge at the Carle Place station, which is undergoing a complete rebuild. Once completed later this year, Carle Place will be completely ADA compliant with new platforms to accommodate 12 car trains, modern features such as WiFi, charging stations and digital signage and even a roundabout on Stonehinge Lane for easy drop off and pickup of passengers.

See time lapse videos of this past weekend’s work HERE.

The LIRR Expansion project is a model for the new way the MTA does business. It remains on schedule and on budget.