The largest pre-fabricated traction power substation in the USA was delivered and assembled in Queens in July as part of the LIRR East Side Access project. The substation was fabricated by Myers Controlled Power, LLC at its facility in North Canton, OH, and delivered to the site in 20 sections – each section spans over 45 feet wide and weighs up to 96,000 lbs. 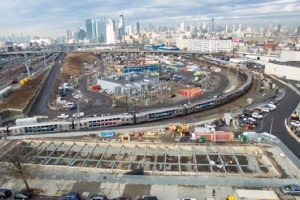 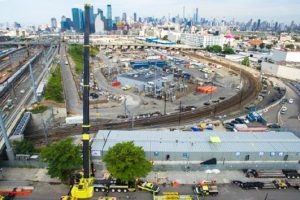 There are currently 104 substations on the LIRR across all areas of the Railroad’s electrified territory.

Each of the pre-fabricated sections of the C08 substation was trucked to Queens, NY, where a concrete base had already been constructed to support the structure. During the third weekend of July, all 20 sections were placed onto the concrete base using a 180 ft crane, one of the project’s largest.

Two of the traction power substations constructed for East Side Access (G02 and C08) were pre-fabricated in sections off site and then assembled in place. Once the substation’s structure is assembled, all the built-in electrical components are connected to temporary power to undergo extensive testing; the substations are then fully energized once they are connected to the electrical grid. You can read more about the energization of the G02 Traction Power Substation here – http://www.amodernli.com/new-substation-for-east-side-access-advances-modernization-of-harold-interlocking-busiest-rail-junction-in-u-s/. 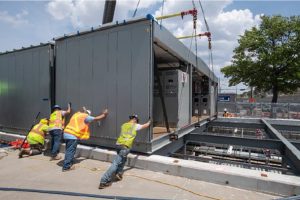 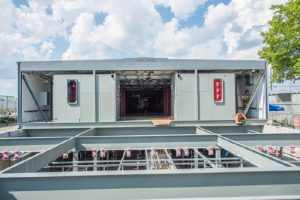 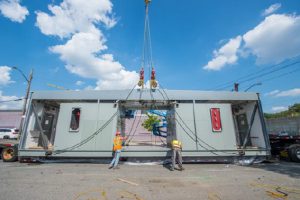 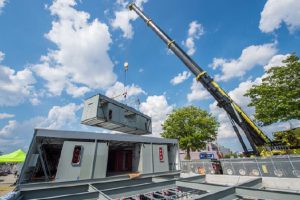 When completed, East Side Access will serve approximately 162,000 customers a day, providing them with a faster and easier commute from Long Island and Queens to the east side of Manhattan in a new eight-track terminal and concourse below Grand Central Terminal. For more information and photos of ongoing construction, please visit the East Side Access project page on AModernLI.com – http://www.amodernli.com/project/east-side-access/.