The Springfield Boulevard Bridge at Queens Village Station, nearing its 100th year, is rolling into its centenarian age with a structural facelift, bringing added safety and aesthetic upgrades to the frequently used train bridge.

Of the five girders on the bridge, the two end girders beneath the platform were repaired following damage that occurred over decades due to corrosion due to salt and water. Crews stripped and removed old paint, and replaced, painted and bolted the top steel plates. The top plates on both girders, constructed as built-up I-beams, were also replaced; additionally, more modern bolts were installed, replacing the rivets used in the original construction. 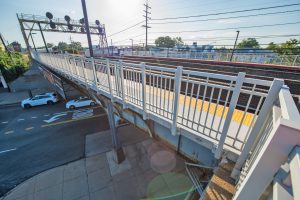 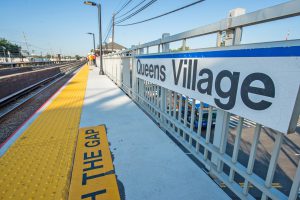 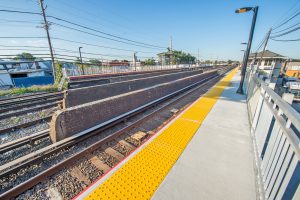 Existing platforms on the bridge were replaced with new precast concrete platforms. Crews also performed some underdeck concrete repairs that have enhanced the bridge’s safety.

The Springfield Boulevard Bridge was built in 1922 in Queens Village, where it serves the Main Line – the bridge is affiliated with the elevated Queens Village Station, which is served by the Hempstead Branch. The $7.4 million project achieved beneficial use in August 2019. For more information and photos, please visit the Springfield Boulevard Bridge project page on AModernLI.com.